Battle mode is a game mode that matches players against other human players. There are two versions of Battle: Unranked battle and Ranked battle. Battle mode can be accessed through the 'Battle' button from the main page. 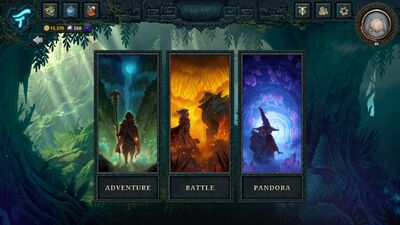 In Battle you can play against human opponents to get different rewards. Battle mode allows player to:

Battle is the main mode to play using constructed decks. It allows to select a custom deck of their choice before searching for opponent. To the top right of the screen player can select what Battle they want to play: Unranked or Ranked. The two modes are functionally identical: two players do battle using constructed decks of their choosing. However, Unranked matches are 'friendly' matches and Ranked matches take place within a ranked system, and offer special rewards. To start searching for match, the player must first select a deck with which to do battle. There are 12 deck slots which allows to switch between different decks. After that player can start to search for opponent using 'Play' button at the bottom right screen.

Casual (or unranked) battle allows you to play without worrying about losing rank. Playing in Casual mode is a good way to learn game mechanics, practice with new decks, and learn card mechanics. Players still receive experience and can complete daily quests or win gold. However, players can’t earn rewards from Ranked mode at the end of the season.

Ranked battle is the serious version of Casual battle, where players can earn special ranks to get rewards and reflect their power in this season. There are 25 regular ranks, and an extra rank, 'God' above that. 'God' rank additionally shows the player's precise numerical ranking and are sorted by player Elo rating. Ranked play occurs in seasons, each a month long. Ranks are numbered in decreasing order (the smaller the number, the higher the rank).

New players start at rank 25. To progress to the next rank, a player must accumulate a specified number of "stars" or points. Winning games will reward players with stars. Losing a game will remove one star from a player. Players can earn stars by winning games and can earn additional stars if the game was won under special situations.

Each rank has a specific number of slots waiting to be filled with stars. When a player fills their rank with stars they get a new rank (in decreasing order). Once a player has filled rank 1 with stars they reach 'God' rank. All ranks are reset at the end of the season to the bottom of the current leauge (for 'God' rank it is rank 10). Note, that each league requires a different number of stars to progress to the next rank:

These ranks represent the League system. Reaching ranks 20, 15, or 10 will raise a player to a new League.

Each month of Ranked battle is called a season. Seasons end on the first Monday of the month. At the start of each season ranks are reset, with each player's new rank determined by their rank at the end of the previous season. Player Ranks will be set to the following numbers:
Current player rank → Rank after each reset
Ranks 20 to 25 → Rank 25

For example, this means that if you were God rank this season, after the reset you will start again at Rank 10.

Players achieving these ranks will receive the following rewards at the end of a season: